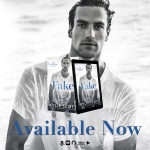 “Such an easy, sexy read! You’ll fall for Patrick Walsh, just like I did. I guarantee it.”
–Monica Murphy, New York Times bestselling author

He walks the red carpet. She’s more familiar with vacuuming one.

When a scandal tarnishes the reputation of hot as hell A-lister, Patrick Walsh, he needs a reputation rescue, pronto.

Enter waitress Norah Peers–a nobody who’s average with a capital A. She’s available, dependable, and has sworn off men for the rest of her natural born life. In other words: the perfect match for a no-strings fake romance.

For the right amount of money, she can avoid waitressing and play the part of his dependable down-to-earth girlfriend. What she can’t avoid–dammit–is the growing steam between them.

But being hounded by the paparazzi and having her life dissected on social media is a panic attack in the making. And while Patrick might be a charming rogue on screen, in real life he’s a six-foot-two confusing, gorgeous, brooding grump, who keeps her at a distance . . . but also makes her feel like this bond between them might be more than just an act.

Being dumped on cue should be no big deal. Except being fake with Patrick is the realist relationship Norah has ever had. What’s a girl to do, but flip the script, and ask for a re-match made in Hollywood?

He slunk into the restaurant mid-afternoon wearing his usual scowl. Ignoring the closed sign, he took a booth near the back. No one else was allowed to do this. Just him. Today’s wardrobe consisted of black jeans, Converse, and a button-down shirt. Doubtless designer. And the way those sleeves hugged his biceps . . . why, they should have been ashamed of themselves. I was this close to yelling “get a room.”

Instead, I asked, “The usual?”

Slumped down in the corner of the booth, he tipped his chin in reply. For such a tall guy, he sure went out of his way to try to hide.

I said no more. Words were neither welcomed nor wanted. Which was fine since (A) I was tired and (B) he tipped well for the peace and quiet.

Out back, Vinnie the cook was busy prepping for tonight, his knife making quick work of an onion.

A smile split Vinnie’s face. He was a huge fan of the man’s action films. The ones he’d made before hitting it big time and taking on more serious dramatic roles. Him choosing to visit the restaurant every month or so made Vinnie’s life complete. Especially since the restaurant, Little Italy, was the very definition of a hole in the wall. Not somewhere generally frequented by the Hollywood elite. Meanwhile, I was less of a fan, but still a fan. You know.

“Get him his beer,” Vinnie ordered.

He was busy with his cell by the time I placed the Peroni in front of him. No glass. He drank straight from the bottle like an animal. Just then, a woman in a red sweater dress and tan five-inch-heel booties strode in through the front door.

“I’m with him.” She headed straight for his booth and slid into the other side, giving the man a dour look. “You can’t just walk out, Patrick. You’re going to have to choose one of them.”

“There had to be at least one that would do.”

“Not even a little.”

She sighed. “Keep this up and you’ll be obsolete by next week. Beyond help. Forgotten.”

“Just another talented but trash male in Hollywood. That’s what they’re saying on social media.”

I wasn’t quite sure what to do. Obviously they knew each other, but he did not seem to want her here. And she really wasn’t supposed to be here. Vinnie had okayed after-hours entry to only one person. On the other hand, if I asked her to leave, she’d probably sic her lawyers on me. She looked the type.

The woman spied me hovering. “Get me a glass of red.”

Angie didn’t move an inch. “They were all viable options. Pliant. Young. Pretty. Discreet. Nothing weird or kinky in their backgrounds.”

“Interesting women is what got you into this mess.” The woman frowned, taking me in. Still hovering. One perfectly shaped brow rose in question. “Yes? Is there a problem?”

Now it was Patrick’s turn to sigh and give me a nod. He was so dreamy with his jaw and cheekbones and his everything. Real classic Hollywood handsome. Especially with his short light brown hair in artful disarray and a hint of stubble. Sometimes it was hard not to stare. Which is probably why his personality tended to scream “leave me alone.”

I headed for the small bar area at the back of the restaurant to fetch the wine like a good little waitress.

“We shouldn’t be discussing this here,” said Angie, giving the room a disdainful sniff. Talk about judgy. I thought the raw brick walls and chunky wood tables were cool. Give or take Vinnie’s collection of old black-and-white photos of Los Angeles freeways. Who knew what that was about?

Patrick slumped down even further. “I’m not going back there. I’m done with it.”

“You just got dropped from a big-budget film, Patrick,” she said, exasperation in her tone. “The industry may not find you bankable right now, but I’m sure gossip about you is still selling just fine. This week at least.”

About Kylie Scott
Kylie is a New York Times and USA Today best-selling author. She was voted Australian Romance Writer of the year, 2013, 2014 & 2018, by the Australian Romance Writer’s Association and her books have been translated into eleven different languages. She is a long time fan of romance, rock music, and B-grade horror films. Based in Queensland, Australia with her two children and husband, she reads, writes and never dithers around on the internet.