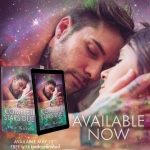 The Stars Duet Boxed Set, including the complete The Stars Series including the bonus story Christmas Beneath the Stars from Amie Knight, is available now!

Beneath His Stars
I met Adam Nova under the twinkling lights of a nighttime sky.
He was hiding, but that gorgeous boy didn’t belong in the dark.
Nevertheless it was where he lived; a different world than mine.
I was Livingston Montgomery, Southern debutante.
With the world at my fingertips, I was well on my way to being another spoiled socialite.
But I didn’t want money.
I didn’t want social status.
I wanted him; tattoos, sarcastic smirk, bad boy reputation and all.
It didn’t matter that he was from the wrong side of the tracks.
It didn’t matter that my family forbade me from seeing him.
I just wanted to be Beneath His Stars.

In Her Space
I was reunited with Livingston Montgomery in the broad sunshine of a Carolina morning, right where she belonged; in the light.
It’d been too long since I’d seen her face.
She had changed, but so had I.
I was Adam Nova, reformed bad boy. Now, successful business man.
I had it all, except for the one person I’d always wanted, and now I was back to claim her.
She was living in the shadows, just a shell of the former girl I knew.
But it didn’t matter that she tried to hide from me in the dark.
I’d follow her into the deepest depths of hell.
I just wanted to be In Her Space.

Excerpt from Beneath His Stars

“Are you smoking?” Her lip curled in disgust.

It was her turn to look disgusted this time. “Do you even speak?”

I nodded again and she shook her head in disbelief before reaching over the space between us and snatching the cigarette out of my mouth so fast I didn’t see it coming. I stood there dumbfounded. People didn’t snatch shit away from me. People were scared of me. Not this brave girl. I should have known.

“Smoking is disgusting.” She said it quietly like it didn’t matter, but I could tell it did to her. She bent over and put the butt out on the driveway before standing up again and shoving it in her pocket.

I smirked. “You gonna keep that?”

Her eyes ignited with anger. “No, I’m going to throw it in the trash because I’m not a litterbug.”

Shaking my head, I muttered under my breath, “Fucking litterbug.” She was being cute. The girl with the too long legs and too big mouth that I couldn’t get out of my mind was fucking cute, too. I was screwed.

I wanted to full-on smile at her cuteness, but I held my happiness close to my chest. God knew it always came with a price. And I was done paying.

“You kiss your momma with that smoke mouth?” she asked snarkily, clearly pissed off about my smirk.

I lowered my head and took a step back, running a hand through my dark hair. I wanted to tell this girl things. Things I had no business telling her, like that I didn’t kiss my momma with anything anymore. Instead, I asked the question that had been plaguing me since she’d seemed surprised it was me who had left the notes.

“Who did you think it was?”

Her face screwed up in confusion. “What?”

I stood straighter and licked my lips before answering. “Who did you think left the notes?”

I was feeling strangely vulnerable in that moment waiting for her answer and I didn’t like it one bit. Why did it matter to me who wrote her or didn’t? Or who else thought she was the most intriguing thing ever? For fuck’s sake, she was just another rich bitch from the island. Why did anything about what she was about to say matter to me at all?

She bit her lip again and I still wanted to reach over and pull it from her teeth. It was sexy that lip bite, innocent even, and for some reason that made it all the more attractive.

“I don’t know.” Her brow furrowed in thought and she looked away, almost like she didn’t want to tell me the answer to my question. But then her eyes landed on mine again. “I thought it was the other guy—”

A disgusted look crossed her face. “God, no. Not him. The blond. The other guy.”

I let out a long breath accompanied by a sarcastic chuckle. “Grady?” That guy didn’t even graduate high school and she thought he knew anything about astronomy. I would have laughed if the whole thing hadn’t annoyed me so much.

Her eyes brightened. “Is that his name?”

I pulled out my pack of cigarettes again. “You like him or something?”

I walked out into the street and lit my smoke far away from her.

She started to follow me. “Where are you going?”

“But I don’t even know your name!” she yelled and stomped a foot.

About the Amie
Amie Knight has been a reader for as long as she could remember and a romance lover since she could get her hands on her momma’s books. A dedicated wife and mother with a love of music and makeup, she won’t ever be seen leaving the house without her eyebrows and eyelashes done just right. When she isn’t reading and writing, you can catch her jamming out in the car with her two kids to ’90s R&B, country, and showtunes. Amie draws inspiration from her childhood in Columbia, South Carolina, and can’t imagine living anywhere other than the South.