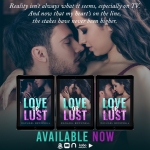 I’ve made my choice.
But with two weeks left to go, the game isn’t over, and anything could happen.

Love or Lust: Part Three, the stunning conclusion in the all-new Love or Lust Trilogy from Rachael Brownell is available now!

The competition is heating up, lines are being crossed, and I’m pulling out all the stops to get what I want. To be the one left standing with the man of my dreams by my side.

Lennon and Jace are both still after my heart. The final prize. Love.

I may not have come here for a second chance at love, but that’s what I found. Now to find a way to hold onto it until the cameras stop rolling.

But reality isn’t always what it seems, especially on TV. And now that my heart’s on the line, the stakes have never been higher.

Excerpt from Love or Lust: Part One

I can hear the sound of paintballs hitting the trees and obstacles on the course. Then I hear Kyra yelp and scream out a curse. I can’t help but peer around the corner, catching sight of the bright blue on her chest. She’s out. Damn, that was fast.

As I’m watching her jog off the course, I spot Drake hiding behind a nearby tree and fire off two rounds, hitting him square in the back. Shaking his head, he throws a middle finger in my general direction before he runs off. Lennon pats me on the back and points to where Milo is sneaking around the back side of a large metal pipe.

Kneeling, Lennon takes the shot, and pink covers the front of Milo’s knee seconds later. He looks up to see Lennon waving at him. He’s awarded a middle finger the same way I was.

Next to go is Bella, followed quickly by Natasha. I avoid a shot from Teegan, jumping behind the tree just in time. Courtney takes out Teegan but is so excited, she doesn’t see Gage sneak up behind her, and he takes her out right after. She doesn’t seem to care. She’s still excited she hit a shot.

Too bad for Gage I saw where he came out from. He’s been hiding this entire time. I think he knew I was gunning for him. Either that, or he was afraid everyone was going to shoot at him after yesterday. And he should be concerned. We all want to take him out. I was actually kind of hoping Kyra would get the chance to exact a little revenge, but that didn’t happen, so I’ll take it.

He moves his leg just enough in the open, allowing me to take a chance. I nail him in the thigh. He lets out a loud growl, jumping out from the bush he was hiding in, looking around for who shot him. His thigh is hidden in the bush still, the pink paint not visible to Jace who sneaks up on the other side of him and shoots him in the back.

“Fuck you, dude! I was already out,” Gage curses, stomping off in true Gage fashion.

Jace ducks out of sight but not before winking at me. He knew Gage was out. That’s fantastic.

Lennon shoots Callen, but then Lennon is immediately shot by Jace. Lennon apologizes as he jogs off, leaving me to face off with Jace. I’d been paying attention to where he was all game, trying not to be the one to take him out, but now I have no choice. I want to win and, knowing he is all that stands between me and victory, I have to put my game face on.

Ducking further into the brush, I stumble over something and land hard on my ass with a grunt. When I look to my right, I find Jace sitting on the ground, watching me.

“I’ve been watching you for ten minutes. You really should watch your back, you know.” He smirks.

“Seriously. The whole time I was looking for you, and you were sitting here, waiting to shoot me?”

“Nah. I wasn’t going to shoot you. I was waiting for you to find me so you could shoot me. Took you long enough.”

Pushing myself off the ground, I point my gun directly between his legs and he winces. “You’re not playing fair.” My protest earns me another devious grin.

“I never said I would,” he replies, his eyes lighting up as he learns closer to me. “I also can’t seem to pull the trigger. I would hate to leave a mark on that perfect body of yours. You’re going to have to shoot me if you want this to end. But, if I get the choice, I’d prefer you not shoot me where you’re pointing. I’m partial to that part of my body.“

With a grunt, I lift my gun and point it directly at the center of his chest, pulling the trigger. He doesn’t even flinch. Instead, he reaches up, grabs my hand, and pulls me down on top of him. His lips meet mine with more force than I expect, and then I’m rolled on my back.

He deepens the kiss, his tongue running across my bottom lip, begging for entrance. I grant him what he wants and wrap my arms around his neck.

Time stands still as I get lost in his kiss. In everything Jace has to offer. No one is around. No one knows the game is over. It’s just the two of us, and I’m enjoying every second of it.

When he finally pulls away, his lips are swollen and there’s a huge smile on his face.

“I’ve been wanting to do that since I first saw you. It was worth the wait.”

I feel the heat creep into my cheeks as he pushes off me and starts laughing.

Looking left and right, I don’t see anyone around. That’s when the pink on the front of my chest armor catches my eye. It must have rubbed off from where I shot him.

About Rachael
Rachael Brownell is an award-winning author of young adult and new adult romance.
Rachael lives in Michigan with her husband, son, snuggly dog, and hateful cat. She moonlights as a bartender a few days a week (her excuse to get out of the house and socialize) and writes almost full time. Her first book was published way back in 2013 and since she’s released 30 additional titles. She writes all kinds of romance – dark, sexy, sweet.
When she’s not writing her next novel, you can find her hanging out with her family, watching her son play baseball, or running on the treadmill at the gym (though she skips more days than she goes). She also enjoys golfing but is still learning, so if you see her on the course… stand back.