Review: The Rebel by Kendall Ryan 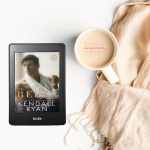 Six years ago, Eden barged into my life and turned everything upside down.

We spent one scorching-hot night together, and then she disappeared into the sunset with the golden jock everyone adored. Which makes sense, right? A girl as beautiful and brilliant as Eden Wynn doesn’t end up with a rebel like me.

I expected them to live happily ever after, but that’s not what happened. She’s back in my life—and tempting me like no one else has. And while I’m certain I’ll only tarnish her shine, I want her.

I’d heard the old notion that one night held the power to change everything. I just never believed it.

Turns out, the East Coast is protective of their hockey team and very vocal about not wanting a young female owner. Well, too bad, because this team is all Grandpa Wynn left me, and I have no intention of walking away.

Enter my new head of security, Holt Rossi. My history with him is . . . complicated. Chemistry reignites between us while the world waits for me to stumble.

He’s supposed to protect me—but who will protect my heart from him?

Warning: This romance contains one growly, broken hero; a bunch of rowdy hockey players; and a smart, hardworking heroine whose life hasn’t been all sunshine and rainbows. This is a no-cheating, scorching-hot love story with a guaranteed HEA.

The Rebel kicks off a brand new series from author Kendall Ryan and it follows the story of Holt and Eden. When we first meet up with Holt and Eden, they’re in college and spend an unforgettable night together. Unfortunately for them, life had other plans and it will be 6 years before the two of them are reunited.

The Rebel is a fast-paced second chance romance. The characters are real and easy to connect with. I loved the idea of this story, Eden trying to run a failing hockey team and Holt being the knight in shining armor security guard. Seriously, it was the best set-up. I loved how easy things were between Holt and Eden. Despite their time apart, the chemistry between them burned hotter than ever and was impossible to ignore. Holt entered Eden’s life at just the right moment. Sure he was broody at times and didn’t think he was right for Eden. But, Holt was exactly what the doctor ordered…

The Rebel is a fun and sexy read. It’s one that you can easily devour in just a few short hours. I thought this book was refreshing and entertaining. It was written with a lot of emotion and had little to no drama. If I had to make one complaint, it would be that I felt some parts were a little rushed. There were a few instances where certain subjects were touched on, yet glossed over at the same time. I found those moments lacking and they left me wanting more.

Overall, I think this series is off to a good start. I did have some issues with this story, but still found it to be an enjoyable read. I had a fun time getting swept up in Eden and Holt’s story and look forward to seeing where this series will go next.

A New York Times, Wall Street Journal, and USA Today bestselling author of more than three dozen titles, Kendall Ryan has sold over 3 million books and her books have been translated into several languages in countries around the world.

Her books have also appeared on the New York Times and USA Today bestseller lists more than 100 times. Ryan has been featured in such publications as USA Today, Newsweek, and InTouch Magazine.

She lives in Texas with her husband and two sons.

Visit her at: www.kendallryanbooks.com for the latest book news, and fun extras.

Subscriber to the newsletter: http://www.kendallryanbooks.com/newsletter/