Cover Reveal: To Want (Such a Bad Idea #2) by Daniella Brodsky 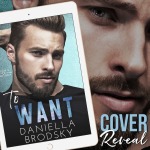 TO WANT (Such a Bad Idea #2) by Daniella Brodsky

I should have known better than to want Finn Wheatley.

Two years after his wife’s death, Australian Billionaire Finn Wheatley finds himself catching me as I literally fall from his desk into his arms.

The stuff of fairytales, no?

No. Because he’s a widower and so not ready to move on.

Only I don’t know that. I just get the hot for Veronica one moment, let’s just be friends the next rollercoaster from Finn. And it is one up and down ride.

He’s driving me mad. All while making me fall in love with him.

But it’s all okay! He wrote me a letter saying we should just be friends.

And everyone knows there’s nothing easier than being friends with a man you can’t stop having naughty daydreams about. Especially one who’s grazing the back of your neck with his fingers one second and running off without an explanation the next.

What could go wrong?

Oh, this is going to end so badly.

To move on because his loyalty to his late wife is so fierce.

But when Veronica literally falls from his desk and into his arms, he’s one torn Alpha.

It’s too complicated obviously, so despite their TK chemistry and the way she keeps making his dark world feel brighter, Finn writes a letter, saying they should just be friends. And everyone knows there’s nothing easier than being friends with a woman you have feelings for.

What could go wrong?

TO WANT is a second-chance billionaire romance brimming with chemistry and all the feels.

Don’t miss out on this hot-as-hell series full of billionaires, pretend boyfriends, enemies-to-lovers twists and turns and hot-as-hell forbidden romance! The Such a Bad Idea series can be read in any order and introduces readers to the drop-dead gorgeous Wheatley Brothers, who feature in all three books.

Daniella Brodsky is the bestselling author of a dozen contemporary romance novels–one of which has been adapted by Disney as the film, Beauty & The Briefcase, starring Hilary Duff (I know, right?!).

She writes sexy, sweet, intelligent romance that often takes readers into far-off destinations. This is because she’s lived all over the world, from New York to London to Sydney and Honolulu. She lives in Australia, and lots of her alpha males are Australian because let’s face it: they’re hot. And the accent doesn’t hurt either. That’s why she married one.

Daniella is an adjunct Creative Writing Lecturer at James Cook University and edits and teaches fiction craft at her Captain Cook Studio. A native New Yorker, she lives in Canberra, Australia, where she is writing her next contemporary romance novel in the FLAME SERIES: INSANELY HOT, THEN NOT, which launches in April and features a particularly epic love triangle. Stop by and say hello at her Facebook page HERE.

Do you sometimes like to have a break from your book boyfriends and keep yourself up all night with a heart-pounding twisty psychological thriller full of “oh no you didn’t!” moments? Check out her pen name: Dan Noble