RSS Feed
← Cover Reveal: Date Me Like You Mean It by R.S. Grey
Release Blitz: Burden by Melissa Ellen → 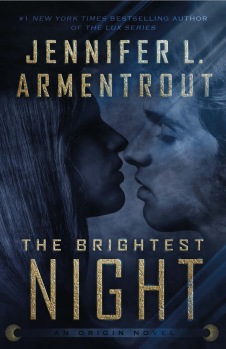 The thrills, drama, and intrigue continue in the third installment of the Origin series from #1 New York Times bestselling author Jennifer L. Armentrout.

He is the darkest star.
You are the burning shadow.
And together, you will bring about the brightest night.

Less than a year ago, Evelyn Dasher was a normal girl, living an unremarkable life.

Now, she’s on the run, under the protection of the beautiful, deadly inhuman Luc. She’s been betrayed by those who were closest to her. And she’s learned truths about herself that she never saw coming–things she once knew, and was made to forget. Truths with devastating consequences. She’s caught in the eye of the storm.

She is the eye of the storm

“If you were letters on a page, you’d be the fine print.”

“When am I supposed to thank you, Luc?” “When I do something worth thanking me for.”

“You’re the burning shadow and he’s the darkest star, and together, you will bring about the darkest night.”

Another thrilling and exciting installment of the Origin Series!

The Brightest Night picks up right where The Burning Shadow left off and kept me on the edge of my seat right until the very end. When we meet up with Evelyn, she’s on the run and under the protection of Luc. Trust doesn’t come easy to Evelyn, as those who were the closest have betrayed her in the past. Her memories may have been gone, but they are certainly not forgotten. Truths that were once hidden will be revealed and have devastating consequences. Forget everything you thought you knew and hold on because The Brightest Night is sure to take readers on one wild ride…

The Brightest Night was everything that I was hoping it would be. It picked up right where the last book left off and had me hooked from the very first page. There is so much I want to say right now, but I absolutely can’t! So, I’ll leave you with this. The Brightest Night is thrilling and exciting. There are dangers around every corner. There are some achingly beautiful moments and a romance that is sure to make readers swoon. Truths will be revealed and the floor will be ripped out from you. I can tell you this, I was in no way prepared for the last 10% or so of this book. I thought I was on the right track and knew how the story was going to play out and let me tell you, I was dead wrong. This was a twist and turn I didn’t see coming. Everything I thought I knew was gone in a snap of a finger and know I’m sitting here dying to know what in the world is going to happen next!

Jennifer Armentrout has once again blown me away with her incredible writing and story-telling. She gave me a story filled with so many emotions and unexpected turns and I loved every single second of it. The Brightest Night was a terrific read from beginning to end and I’ll be anxiously waiting for the next installment of the Origin Series.