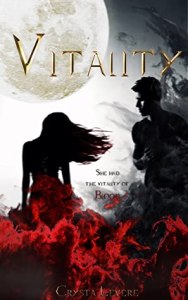 To Ava, love is about as real as fairy tales. But it might be that fairy tales, myths, and magic have some truth to them after all — as well as the monsters that lie in the shadows. Or she could just be completely out of her mind.

After a mental breakdown and a move to a new town, everything changes when Ava clashes with a stranger with eyes as black as midnight and a terrifying sinister air. Her wishes to feel something again become granted. But Ava soon learns that not only is he as cold as he is beautiful, but he brings something out of her, stronger than ever, like fuel to fire — something she’s desperate to bury. He haunts her dreams and waking life, and staying away becomes harder than she could have ever imagined, risking her life, her humanity, and the people that she cares about. Not to mention the fate of the world.

A violent passion. A dangerous bond. A nightmare that will change everything.

Vitality is the promising debut novel from author Crysta Levere. Vitality follows the story of Ava and Layton.  After suffering a mental breakdown, Ava decides she needs to move and have a fresh start. She instantly becomes friends with her roommate Dalilah. Dalilah brings Ava into her circle and gives her the friendship that Ava hopes will help her move on. Everything changes for Ava when she meets a mysterious stranger named Layton. He’s beautiful yet cold. He brings out a side in Ava that she didn’t know existed. Layton is everywhere, even her dreams and staying away is proving harder than Ava thought….

Overall, I thought this book was an ok read. I found the plot to be promising and original. I liked the darker tone that this book gave off. I thought this story was written well and I liked that it wasn’t your typical vampire romance. I thought the characters were interesting and they definitely left you wanting more. I also appreciated the way the author dealt with the heavier subjects and the plot did hook me from the beginning.

However, there were some things that bothered me about this book. While I felt that the story was written well, there were times where I was left utterly confused. I didn’t really know what was going on and that felt a bit distracting to me. Now, being left in the dark, isn’t always a bad thing, but there is a big difference with being left in the dark and feeling utterly confused. My other issue, and to some, it might seem like a silly one, was that Ava kept going to her locker. Now, if she was in high school, this wouldn’t even be an issue, but she’s in college–there are no lockers in college. And that little aspect just drove me nuts. My last issue was that when it came to the characters, I wanted more. Don’t get me wrong, I found all of the characters enjoyable and I liked what we got from them, I just wanted a little more depth and connection, especially with Ava and Layton.

Overall, I thought this book was an ok read. It wasn’t a hit or miss for me, just somewhere in between. I think that this book wasn’t bad for a debut novel and I do feel that the author has a ton of potential. Vitality is an intriguing story with a different twist on vampire romance. While I did find some aspects of the story confusing, I will say that Vitality does deliver with the unexpected twists and turns, and an ending that I certainly didn’t see coming. So, even though this book wasn’t a 100% hit for me, I will say that the ending left me intrigued enough that I’d like to see what happens in the next book.

*I was provided an ARC copy of this book via NetGalley, in exchange for an honest review*