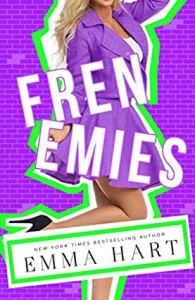 There are some things you just have to deal with.

Like your hot as hell college booty call moving in next door with his adorable daughter.

The only time we’ve ever gotten along is under the sheets. Old habits die hard because two minutes on my front porch is how long it takes us to bicker.

Not that a little fact like that bothers my healthy, eighty-year-old grandmother and roommate who’s determined to see me married before she bites the dust.

Unfortunately for me, she’s got her eye set on Mason Black.

She’s barking up the wrong tree. He’s not The One, no matter how much I swoon when I see him with his daughter. I have no intentions of rekindling anything with him—until a rubber spider in my mailbox starts off the mother of all neighborhood prank wars, just like the ones we had in college, and throws me right into his path.

One that leads right to his bedroom…

“It was a look I felt everywhere–the kind of look where you just knew not an inch of your body had gone unnoticed.”

Frenemies is the latest romantic comedy from Emma Hart that will have you in stitches laughing one moment, and swooning in the next. Emma Hart really steps it up with this second chance, enemies to lovers story.

Frenemies follows the story of Imogen and Mason. Imogen is pretty happy with the life she leads. She’s a starving artist who runs her families art studio and puts up with her meddlesome grandmother. Grandma Jen is determined to find a suitor for Imogen before she dies, and unfortunately for Imogen, she’s got her sights set on their new neighbor. However, their neighbor is anything but a stranger. Imogen knows him up close and personal. He’s the guy who never called and took her heart when he left. But, no matter how hard Imogen tries to stay away from Mason, fate keeps throwing these two back together. Will Mason be able to convince Imogen that he made a mistake and win her back?? There’s only one way to find out….

Frenemies is a laugh out loud good time. This book sucked me in from the very first page and kept me begging for more. I loved Imogen and her family. Her grandma Jen and friends were hilarious. I loved how nosey and meddlesome they were. Grandma Jen really took her antics seriously and wouldn’t let anything stop her from being matchmaker!

And then we’ve got Mason….Yeah, Mason messed up big time. Him & Imogen were only supposed to be a booty call all those years ago, but somehow along the way, feelings got involved. And when Mason left town, he took Imogen’s heart with him. And now that fate has connected these two again, Mason isn’t about to let Imogen slip away. Mason not only had a heart of gold, but was a terrific dad. I loved how real and honest his relationship was with his ex. I liked that they were able to still remain friends and co-parent without all of the drama. I knew that Mason would be a terrific match for Imogen, if only should forget the past. And last but not least, we’ve got Imogen. She’s a starving artist who caters to her grandma & her crazy friends. She’s got a good heart and a snarky attitude. I loved her smart wit and the banter she had with Mason. The tension between them was delicious and I couldn’t wait to see how their story would end.

Overall, Frenemies is a terrific read to spend your day getting lost in. You’ll laugh. You’ll swoon. You’ll find yourself shaking your head. This book was such a good time, I never wanted it to end. And the best part, there was absolutely no drama!!

If you’re looking for a fun and entertaining romantic comedy, look no further. Frenemies is the romance that you’ve been waiting for!