RSS Feed
← Blog Tour: A Perfect Lie by Lisa Renee Jones
Waiting for Wednesday: Only Ever You by CD Reiss → 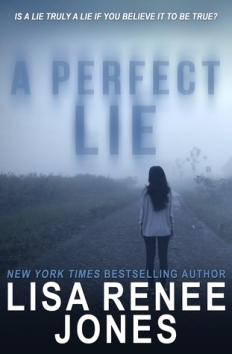 They say that you are not a product of the environment that you’ve grown up in, that you create your own story, tell it your way. That you get to pick your own future. They lied. If you’re honest with yourself, you believed that lie, too, like I used to, because I wanted to, and even needed to believe that I had some semblance of control over my own self. The truth is that control is part of the lie. The ability to become a person of our own making is the perfect lie. I concede that it might appear that some people control their destiny, but I assure you, if you gave me fifteen minutes, I could pull apart that façade. We are born into a destiny that we never have the chance to escape. That’s why I must tell my story. For those of you out there like me who were told that you have choices, when you never had one single choice that was your own. For those of you out there who were, who are, judged for decisions you’ve made that were directed by your destiny, not by the façade of choices. The irony of the story within this story is how one person’s predisposed destiny can impact, influence, and even change the lives of those around him or her. How one destiny ties to another destiny.

I am Hailey Anne Monroe. I’m twenty-eight years old. An artist, who found her muse on the canvas because I wasn’t allowed to have friends or even keep a journal. And yes, if you haven’t guessed by now, I’m that Hailey Anne Monroe, daughter to Thomas Frank Monroe, the man who was a half-percentage point from becoming President of the United States. If you were able to ask him, he’d probably tell you that I was the half point. But you can’t ask him, and he can’t tell you. He’s dead. They’re all dead and now I can speak.

“Bad memories take up good time that should have been shared.”

From the moment I picked up this book, I was instantly swept up in the web of A Perfect Lie. I was totally intriuged by Hailey’s story was desperate to find some answers. I had no idea what was really going on with her; only that I had to know more. The deeper I fell into Hailey’s story the more lost I was. Just as I thought I was putting the puzzle together, the rug would once again be pulled out from me.

A Perfect Lie is filled with mystery and suspense. There is danger and intrigue around every corner. I never knew who I could trust and who I couldn’t. Everyone played their part exceedingly well and they certainly kept me on my toes. At times, I felt like I was Alice going down the rabbit hole. Nothing and no one was as it seems. Who was real and who wasn’t? Who’s agenda could you trust? I had so many questions and was dying to discover the answers. A Perfect Lie kept me on my toes and begging for more. I couldn’t put this book down. I loved trying to solve the riddle of Hailey’s story and couldn’t have been more thrilled with how this story played out.

*I won an advanced copy of this book. This is my honest review*

Posted in 4 Stars, Adult, Amy, Reviews, Romantic Suspense. Bookmark the permalink.
← Blog Tour: A Perfect Lie by Lisa Renee Jones
Waiting for Wednesday: Only Ever You by CD Reiss →