Review: Tied to His Betrayal by Stacey Kennedy 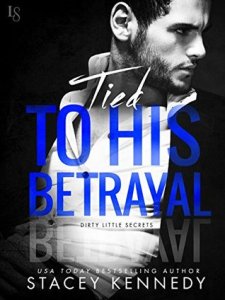 Darius Bennett can’t live without supreme control. A self-made billionaire, he’s rich enough to get anything—and any woman—he wants, yet he’s still haunted by a broken relationship. Five years ago, Darius let Taylor Erikson go because he knew he could never give her what she truly wanted: his heart. But the moment Taylor walks back into his life, bruised and beaten, Darius blames himself. To make good on his betrayal, he vows to help her heal—in and out of the sheets.

Once upon a time, Darius was Taylor’s world. Now his fierce embrace is exactly what she needs to get back on her feet. But Taylor pays a heavy price for her sizzling nights with Darius. As the emotional ties become stronger than ever and the paparazzi hunt her down for their next juicy story, Taylor must face some hard truths. They can’t go back. And to move forward, the key to loving Darius isn’t about keeping his secrets—it’s about exposing them.

Tied to His Betrayal is intended for mature audiences.

“I’m seeing Darius beneath all the shields, and my world is collapsing around me.”

“There is so much that I want to take from her. I want her soul, her body. I want her, just like this.”

Tied to His Betrayal is the second book in the Dirty Little Secrets Series, but can be read and enjoyed as a stand-alone novel. Told from dual points of view, Tied to His Betrayal is Darius and Taylor’s story. Darius has to have control in every part of his life and is used to always having his way. Now that’s he’s a self-made billionaire, he can have anyone or anything that he wants. But, there’s only one person that he wants and that person is off limits to him. You see, he’s always wanted more with Taylor, but was afraid that he couldn’t be exactly what she needed, so he lied. He said what he needed to in hopes that she would move on and have the life that she deserves. However, fate had other plans in mind. When Taylor comes back into Darius’ life, it’s as if no time has passed at all. He tries desperately to put some space between them and fight the feelings that he’s always had, but that soon will prove to be impossible. Will Taylor and Darius finally give in and take a chance on what they so desperately want and need? There’s only one way to find out….

Tied to His Betrayal is a seductive and sexy read. Darius and Taylor’s story pulled me in from the very first page. When I first met the two of them, I just knew their story was going to be something special and boy, they did not disappoint. The chemistry and connection between the two of them was just explosive. It had you on pins and needles, with anticipation, just waiting for these two to give in. Their connection was so strong and survived the toughest of situations. All you could do is just sit back and cross your fingers that things would play out the way that you are hoping for.

Tied to His Betrayal is a quick and easy read. Once you pick it up, you are not going to want to put it down. The story-line is sexy and captivating. The characters are easy to connect with and their story is easy to get lost in. Tied to His Betrayal has just the right mix of sexiness, drama, suspense and angst. I really enjoyed this book and can not wait to see where the series will take us next.

*I was provided an ARC copy of this book, via NetGalley, in exchange for an honest review*