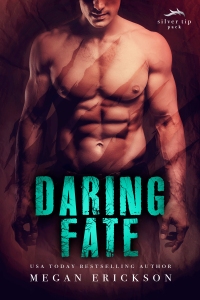 We all have tragic backstories in today’s world…

I wake up chained to the wall of a dark cell aware of two things: I failed my sister, and I smell my enemy.

When I’m taken to meet Dare, the alpha of the Silver Tip pack, I’m sure I’m about to lose my throat. The last thing I expect is for the Alpha to recognize me as his fated mate. No way is he going to let me go now, and I still have to find a way to rescue my sister.

As I plot my escape to save her, I find that if I leave, Dare could be killed by power-hungry members of his pack. And now he’s more to me than my fated mate—my heart is involved. With time ticking by on my sister’s life, I have to make a choice I never thought I’d face—my sister’s life or my mate’s? That’s if I can survive the undead shifters intent on killing me first…

I want to start this review off by saying that this is not my normal genre that I read. But, every once in a while, I will make an exception and dabble into the M/M world….

Daring Fate is an exciting first book in an all new series by author Megan Erickson. I have read lots of her traditional romance novels, but this is the first one of her M/M novels that I’ve read. And I have to tell you, Megan Erickson has done an amazing job. Not only has she delivered a brilliant and sexy romance, but she’s also taken the plunge into the paranormal world. She has knocked it out of the park in my eyes.

Daring Fate is well written and totally exceeded my expectations. This story sucked me in from the very beginning and I couldn’t help but loose myself in this intriguing world that the author created. I thoroughly enjoyed all of the paranormal elements and LOVED the idea of a True Mate Bond. The instant bond between our two characters intrigued me and had me dying to know more. Their chemistry was undeniable and loved watching their relationship transform.

Daring Fate not only entertained me, but it memorized me. I just couldn’t get enough and was unable to put this book down. This story is everything I never knew I needed. It’s filled with angst, romance, sexy good times and fantastic paranormal elements. I think this series is off to a wonderful start. I am so glad that I decided to take a chance on a different type of romance and I look forward to continuing on with this series and seeing where it will go next.

Dare’s eyes flashed. His fingernails were still curved into claws, his canines descended, and a dusting of fur still covered his shoulders. He looked wild and a little feral. “Shift.” His voice was garbled, and I backed up a step, dipping my head as I whined.
He took a heaving breath and the fur on his shoulders disappeared. His eyes closed and when they opened, they were nearly black. “Shift,” he ordered again.
My body obeyed.
Never in my life had anyone been able to command me to shift, but Dare could. His command was a swell of power that I couldn’t deny. My bones cracked as I shifted back to human form, then I collapsed onto my stomach and panted as I tested my limbs. My ribs weren’t even tender.
Fuck yeah, shifter power.
I rose to my feet, shaking out my arms as I lifted my head to meet Dare’s gaze.
His teeth were bared, eyes cycling between green and black like a two-toned tornado.
He moved so fast, I didn’t even see his arm, didn’t realize he was in motion until a hand wrapped around my neck and claws dug into my throat. He hauled me against him, and with my feet not touching the floor, the only thing I could do was clutch his shoulders and wrap my legs around his waist.
“Mine,” he growled against my lips.
Not gonna lie, I was fucking terrified. Dare was only half there, his Were pulsing inside his skin. I didn’t know his Were, and I hoped to hell Dare had enough power to stay human.
I shifted my hands to grip his face, my fingers digging into his scalp as I rutted against him. The mating instinct overtook all my other thoughts. So, despite my terror, I was hard as hell. “Yours,” I muttered back.
That seemed to appease the Were, because Dare’s eyes stopped flickering, finally resting on green.
His chest rumbled, and he pressed our lips together—hard, punishing, furious—before delving his tongue inside.
The kiss was possessive and all-consuming. While I’d fucked around plenty, I’d never been kissed in my life, so I didn’t know how to deal with it. My head was spinning, my body on fire, ass clenching in anticipation for being taken. I wanted it. God help me, but I wanted him to pin me down and fuck me until I broke.
I wanted to be owned.
So I kissed him back, pushing against his tongue with mine, gnashing his lips with my teeth, which only seemed to spur him on harder.
The room tilted, and then Dare was looming over me, my back against the mattress as he gripped our cocks in one hand and began to pump. My cock was leaking pre-come, coating my stomach and mixing with Dare’s pre-release.
His shoulders bunched as he held himself above me, his attention on stroking us. His gaze lifted to mine, and when our eyes met, I was thankful they were green. He peeled his lips back, revealing his sharp teeth. “I love the smell of you, but it’s wrong. It’s all wrong.”
Great. I prepared to have my throat ripped out for mistaken mate identity. “What?”
“You don’t smell like me yet.” He ran his nose up the column of my neck and then nipped my ear. “I can’t be around you anymore without imprinting my smell on you.”
“Make me smell like you, then.” I reached down to grip his balls. “I’m all healed now. Take me.”
In the far recesses of my brain, I knew this meant the life I had planned for my brother and sister would change. But I couldn’t help it, not while Dare’s scent was in my nostrils, while his power was surrounding me, and as his hand left my cock to swirl through the wetness on my stomach.
I was going to be mated. To a Were. And there was no going back.

Megan Erickson is a USA Today bestselling author of romance that sizzles. Her books have a touch of nerd, a dash of humor, and always have a happily ever after. A former journalist, she switched to fiction when she decided she likes writing her own endings better.
She lives in Pennsylvania with her very own nerdy husband and two kids. Although rather fun-sized, she’s been told she has a full-sized personality. When Megan isn’t writing, she’s either lounging with her two cats named after John Hughes characters or… thinking about writing.