RSS Feed
← Release Day Blitz: Blind Reality by Heidi Mclaughlin
Review: The One for Me (Danvers #8) by Sydney Landon →

Review: Loud Is How I Love You (Hub City #1) by Mercy Brown 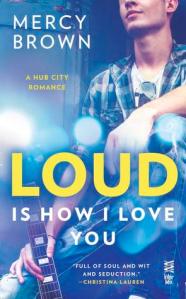 One girl’s heart gets rocked to the core in the first novel in this sexy New Adult series.

Twenty-one-year-old front girl Emmylou knows that getting her band noticed in the ‘90s indie rock scene will be no easy task. She definitely knows better than to break the number one rule of the band: Don’t sleep with your bandmates! But after she ends up having the best sex of her life with her guitarist, Travis, she finds following that rule is a lot harder than it sounds.

When the band gets the gig of their dreams, making it big seems just within reach. But Emmy’s inability to keep her hands off Travis threatens everything they’ve worked for. Can Emmy find a way to break the rules and not blow the chance of a lifetime?

Loud is how I love you

Loud is how I know you’re there

Stay loud so I don’t lose you

Loud Is How I Love You is the debut novel by author Mercy Brown, and I gotta tell you, she knocked it out of the park with this one. From the moment you pick up this book, you are pulled into the story of Emmy and Travis. Emmy has one goal and that is to have her band make it big. So, in order to accomplish that, she has one simple rule: Don’t sleep with the band. Too bad, following that rule isn’t so easy. You see, there’s always been a connection between Emmy and Travis, but they’ve never acted on it….until one night. You see this one night, they played an epic show and well, one thing led to another and suddenly Emmy and Travis find themselves having the best sex of their life. Emmy tries desperately to not make a big deal out of it, even though she knows Travis wants more. She tries to stay away, but she just can’t. Will Emmy and Travis make a go at something that has the potential to be amazing or will Emmy risk it all for the sake of the band and making it big?? There’s only one way to find out…

I have to say, I really enjoyed Loud Is How I Love You. I loved the story-line. I found it be a very refreshing take on a rock-n-roll romance. I thought the writing was smart and engaging. I liked the characters right away and found them easy to connect with. I loved the chemistry between Emmy and Travis. I thought they had great push and pull. Yes, I did want to either shake or slap Emmy a few times. She made some terrible decisions over her fear of ruining the band. But, she’s young, and I thought that it was a very honest take on her feelings and it made the journey to HEA, all that more better–in my opinion.

Loud Is How I Love is a fantastic debut novel. It gave me everything that I was looking for and more. The story is well paced and is full of angst, drama, and lots of sweet romance. I thoroughly enjoyed this read and can not wait to read more from this author in the future.

*I was provided an ARC copy of this book, via NetGalley and the publisher, in exchange for an honest review*