Review: When We Fall (Take The Fall #2) by Marquita Valentine 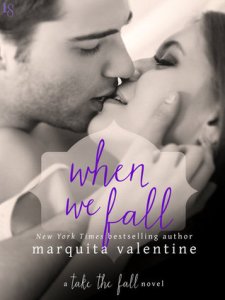 In the captivating new novel in Marquita Valentine’s Boys of the South spinoff series—perfect for readers of Abbi Glines and Katy Evans—a small-town sweetheart takes a chance on the bad boy who’s always been her hottest fantasy.

The last time Piper Ross saw her best friend’s sexy older brother, Jase Simmons, he was being taken away in handcuffs. Seven years later, two things haven’t changed: Piper is still head-over-heels in love with him . . . and Forrestville’s chief of police—Piper’s dad—still hates his guts. So when Piper sees a chance to get close to Jase, she makes her move—literally. As his new roommate, and as the office manager of his tattoo shop, Piper won’t be satisfied until Jase knows that she wants to be his.

The quintessential good girl, Piper is pure temptation for Jase. The only reason he’s always kept his distance is because she’s the last person he’d ever want to hurt. But once he realizes that Piper is ready to take the leap, everything just makes sense. Suddenly Jase feels like a new man—until nasty rumors start swirling and Piper’s heartless father stirs up even more trouble. Now Jase must convince Piper that she wasn’t wrong about him . . . because falling in love never felt so right.

“When we fall…we don’t know how hard until we hit the ground.”

This was such a fantastic read. When We Fall is the second book in the Take The Fall series, but can totally be read as a stand-alone. Ever since I finished the first book in this series, I have been dying to get my hands on the next one and let me tell you, this one does not disappoint.

From the moment I picked up this book, I was dying to know more. I was intrigued by Piper and Jase. Jase has had a hard life. It’s been an adjustment for him; returning to life after prison. He’s been working hard and trying to turn his life around. He wants to be someone better, someone that Piper could be proud of. See, even though Jase doesn’t show it, he’s been in love with Piper for years. He’s always wanted her; felt a need to protect her. But, he’s always felt like he wasn’t good enough for her. So, when the time comes and Piper is in need of a job and place to live, Jase can’t say no. Is it a bad idea? Probably. Will they both regret it? Maybe. But, he can’t say no….On the outside, it seems like Piper has lived the charmed life: rich family, nice car, fancy clothes. But, a closer look will show that Piper’s life has been anything but perfect. Piper has never lived a life with love or touch. Amazingly, she always sees the good in everyone, especially Jase. She has been in love with Jase for as long as she can remember. And now that she’s older, she’s finally going to do something about it…..

I loved everything about When We Fall. It was a very good friends to lovers romance. The story-line was captivating and held my attention the entire time. The story was well paced. I loved the characters. Jase and Piper were both very easy to connect with. I loved the chemistry between Jase and Piper. It was HOT and completely undeniable. The push and pull between the two of them definitely kept me coming back for more. They say opposites attract and that is the truth here. These two might be complete opposites, but they couldn’t be more perfect for each other if they tired!

When We Fall was a great addition to this series. It had the perfect balance of angst, drama, and romance. I can’t get enough of this series and these characters and am really looking forward to seeing where this author will take us next!

*I was provided an ARC copy of this book, via NetGalley, in exchange for an honest review*